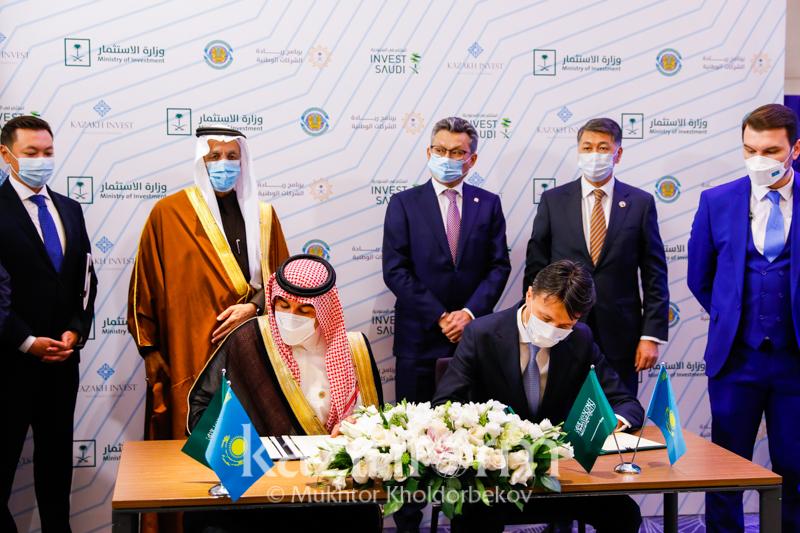 NUR-SULTAN. KAZINFORM – Over 30 Saudi Arabian companies are looking into the opportunity to invest into Kazakhstan. It was announced at the Kazakhstan-Saudi Arabia Investment Forum that began its work in the Kazakh capital, Nur-Sultan, earlier this morning, Kazinform correspondent reports.

The delegation of the Kingdom of Saudi Arabia led by Minister of Investment Khalid Al-Falih arrived in Nur-Sultan to take part in the 5th session of Kazakhstan-Saudi Arabia Intergovernmental Commission for trade and economic, scientific and technical and cultural cooperation.

Within the framework of the visit to the Kazakh capital, the delegation took part in the forum that brought together over 170 representatives of business circles of both countries.

At the forum Deputy Foreign Minister Almas Aidarov stressed the importance of the Saudi market in strengthening the business ties and trade and economic relations with Kazakhstan as well as the vast potential of expanding the investment cooperation between Kazakhstan and Saudi Arabia as part of the implementation of the Saudi Vision 2030 National Program.

According to Deputy Minister Aidarov, Saudi Arabia has become a successful model for many countries in terms of how to make business, diversify economy and carry out social reforms. He added that Kazakhstan and Saudi Arabia have a vast potential of further cooperation in such spheres as economy, agriculture, finance, petrochemistry and more.

Chairman of the Management Board of JSC «NC «KAZAKH INVEST» Meirzhan Yussupov also took the floor at the forum to make a presentation of Kazakhstan’s investment potential to Saudi partners and familiarized the participants of the forum with new approaches used to attract investment to the country.

Attending the forum were heads and representatives of such Kazakhstani companies as KIDF, AIFC, QazTrade, Kazakh Tourism.

On the sidelines of the forum with the support of KAZAKH INVEST Saudi Arabia’s Minister of Investment Khalid Al-Falih held meetings with the Kazakhstani ministers of agriculture and energy as well as leadership of JSC «NAC «Kazatomprom», KAZ Minerals and other companies. Some 20 b2b meetings between representatives of Kazakhstani business with large Saudi companies in the field of agriculture, pharmaceuticals, tourism, light industry and other sectors were organized as well.