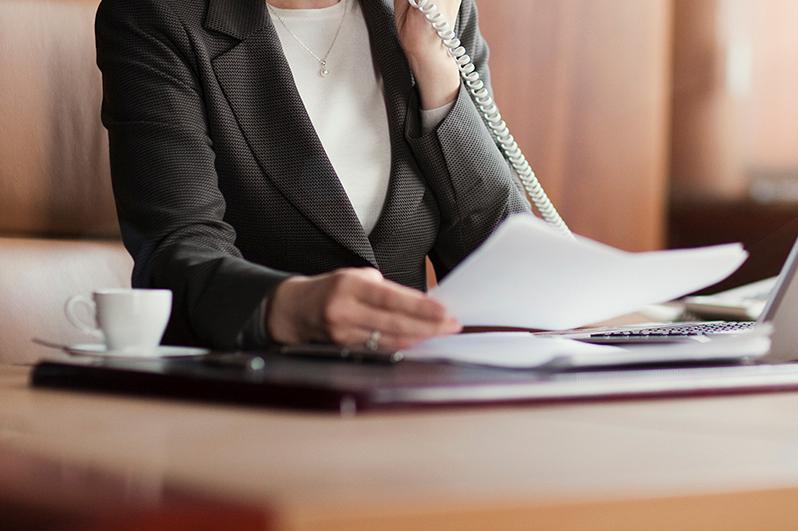 How does women entrepreneurship develop in Kazakhstan?

NUR-SULTAN. KAZINFORM - Doing businesses was previously considered by many to be a man’s realm, but more and more women now take top positions opening and running their own businesses. More about the development of women's entrepreneurship is in the latest analytical article of Kazinform. 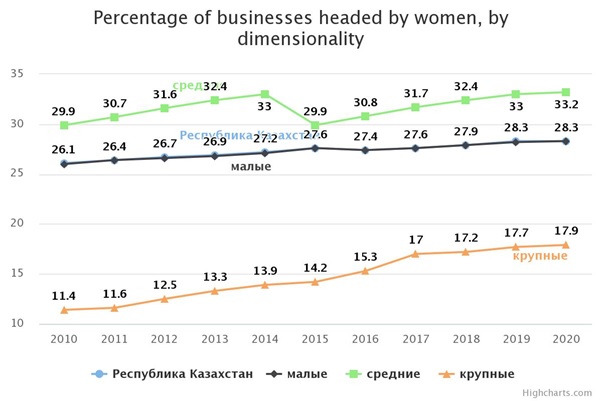 Women-led small and medium-sized enterprises provide 31 percent of jobs in this sector and approximately 14.6 percent of the country's GDP. At the same time, 20.9 percent of the self-employed population in Kazakhstan is women, while the level of economic activity among women of working age stands at 78.6 percent.

The majority of women-led businesses are in the healthcare, education and services.

«If previously it was primarily trading where women were working, now women account for 50 percent of employees in medicine, healthcare, education, trade, and social services. Why I am focusing on these new areas is because this is a real steady expansion of women’s economic opportunities,» said Lyazzat Ramazanova, Chair of the National Commission for Women, Family and Demographic Policy of Kazakhstan, in her interview with one of the country’s TV channels.

She noted that entrepreneurship remains key to expanding women’s opportunities and focusing more on policies to advance women’s participation will benefit the country’s economic growth, as women remain at disadvantage.

According to McKinsey Global Institute Report, advancing women’s equality may add up to $12 trillion, or 11 percent, to annual GDP by 2025.

Kazakhstan has created multiple channels to promote women’s entrepreneurship in the country. Besides state-run programs, the country also launches resource centers aimed at providing budding and current women entrepreneurs with a full range of non-financial services as well as practical assistance in implementing their business projects such as training and masterclasses.

The first resource center opened in November 2021 in Turkistan and the plan is to open 16 additional centers.

In addition to the financial support provided by the government and financial institutions, the Association of Businesswomen of Kazakhstan unites more than 15,000 female entrepreneurs, enabling them to voice their concerns and share experience.

According to Ramazanova, despite the reforms implemented, Kazakhstan should not stop the work to reduce gender inequality. In World Bank’s Women, Business and the Law 2021 Report, Kazakhstan scored 69.4 points, lagging behind its neighbor Uzbekistan.

«Increasing the participation of women in business, especially at the management level of large companies, should remain a priority. It is also important to ensure that rural women are involved in small businesses,» she said at the Women in Business Forum that took place on February 23 in the Kazakh capital Nur-Sultan.

Kazakhstan ranks 80th in the Global Gender Gap Index 2021 that benchmarks the evolution of gender-based gaps among four key dimensions - Economic Participation and Opportunity, Educational Attainment, Health and Survival, and Political Empowerment and tracks progress towards closing these gaps over time.

Kazakhstan ranked 47th in terms of economic participation and opportunity, and ranked 19th in the region of Eastern Europe and Central Asia.

The COVID-19 pandemic, however, hit women particularly hard. The sectors where women prevail - wholesale and retail trade, agriculture, and services - were most affected by the crisis.

The pandemic has exacerbated the existing gender pay gap in Kazakhstan – women earned on average 25 percent less than men. This increased women’s risks of not meeting their credit obligations and destabilizing their financial situation.

Women were under additional pressure during the lockdowns, as many had to care about children of school and preschool age being unable to combine work and household issues.

But the problems went far beyond.

«We conducted a survey last year. The officials were saying that the state provided unprecedented support for businesses, and we looked into whether women received this support. 70 percent of female entrepreneurs did not have an idea of what opportunities they had,» said Ramazanova stressing the need for greater involvement of women in state support measures.

Ramazanova also noted gender stereotypes that are rooted in society and that affect women’s economic situation.

Overall, Kazakhstan has been making effort to promote support to women. Kazakhstan was the first Central Asian country to establish a national entity to promote gender equality - the National Commission on Women, Family and Demographic Policy.

In 2009, the country adopted the law on state guarantees of equal rights and opportunities for men and women, and in 2016 - the concept of family and gender policy up to 2030, which seeks to ensure equal rights for all and prevent gender-based discrimination and gender imbalances.

Kazakhstan has ratified several major international treaties, including the United Nations Convention on Elimination of All Forms of Discrimination Against Women (CEDAW), the Beijing Declaration and Platform for Action, the Convention on the Political Rights of Women, six International Labor Organization (ILO) conventions and the 2030 Agenda for Sustainable Development (SDGs).

The effort remains visible on this level, but gender imbalance remains that affects women’s opportunities across many sectors.

In 2020, women held only 12.5 percent of political civil service positions, 26.5 percent of seats in Parliament, and 22 percent of executive banking jobs, according to the data from the National Statistics Bureau. 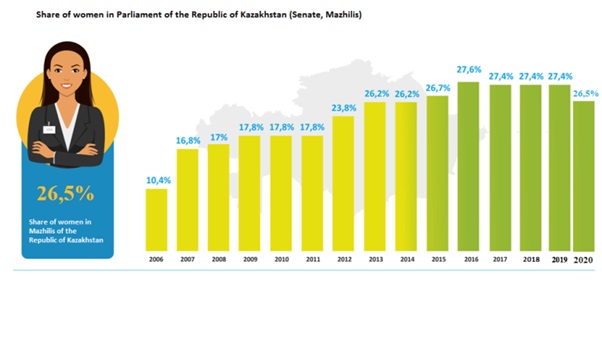 With all the efforts in place, Kazakhstan needs to continue investing in women’s economic empowerment, including through the engagement of socially vulnerable women in entrepreneurial activities, to ensure greater equality, poverty reduction, and economic growth for all.