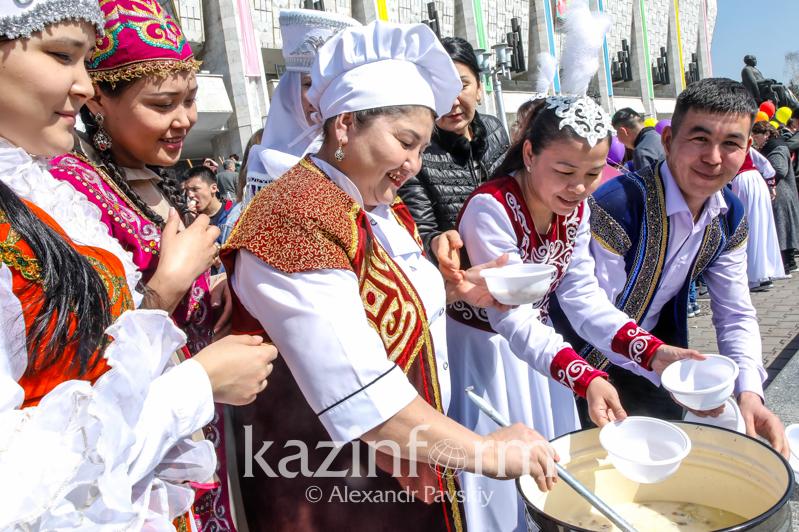 NUR-SULTAN. KAZINFORM - Kazakhstan and the entire Turkic world are preparing to celebrate Nauryz, New Year, or the festival of spring, on March 22. More about how the countries celebrate the important holiday is in the latest article of Kazinform.

Nauryz comes on March 22 to mark the day when spring arrives and to the equinox when the Sun crosses the equator from south to north and night and day are equal in length. Nauryz is a centuries-old tradition, new day in Farsi, and spelled Navruz in Uzbek, Nauryz in Kazakh, Novruz in Turkmen, Nooruz in Kyrgyz, and Naurozin in Dari.

The holiday was not celebrated for a long time between 1926 and 1988. It was not until 1988 that it began to be celebrated in Almaty and several other regions and in March 1991, it acquired the official status of a national holiday after a presidential decree.

Though different countries may celebrate the day in different ways, the essence of the holiday remains common – celebrating kindness and mercy.

According to tradition, people used to clean up their houses, prepare for sowing campaigns, get rid of debts, forgive people, and make peace with enemies, overcome negative emotions to leave them behind. In the nomadic lifestyle of Turkic-speaking countries in ancient times Nauryz also meant that the harsh winter with its freezing temperatures that sometimes could be deadly for nomads is over.

During the Soviet Union, any celebration of the Nauryz holiday was banned. Only after Kazakhstan gained independence, did the holiday revive its significance and become part of the nation’s cultural code and identity. In 2001, Nauryz was declared a national holiday and has been celebrated three days from March 21 to March 23 since 2009.

Nauryz is usually accompanied by mass festivities and big family gatherings. People get together on the squares to visit yurts, which served as home for nomadic Kazakhs and try dishes that were prepared to treat the guests.

On the streets that are usually equipped for the festivities, young people gather at altybakan, a big traditional hanging swing.

Families and friends gather for celebrations at home over a big dastarkhan (table setting), cooking the most delicious dishes, including baursaks, beshbarmak, and Nauryz kozhe, singing folk songs and playing traditional games.

Nauryz kozhe is a signature drink of the holiday consisting of seven ingredients, including water, meat, salt, milk, or yogurt, one type of grains, either rice, corn, or wheat. The choice of the number of ingredients has its roots in the special spiritual significance of the number seven.

«It is my favorite holiday. Usually, we celebrate it with the family, visiting our family friends and relatives altogether. We always cook Nauryz kozhe and prepare dastarkhan in case guests arrive in our house,» said Almaty resident Jibek Toktash in an interview for this story. «When I was a child, we used to go to the square, watch the concert, eat free baursaks and kozhe.»

Kazakhstan is also considering changing approaches to Nauryz celebrations, according to Kazakh Vice Minister of Culture and Sports Nurgisa Daueshev.

In Kyrgyzstan, Nauryz is also an important holiday, where the day also starts with mass festivities and music, including karnay, a national long wind musical instrument.

Cities and villages also celebrate the holiday with concerts, including performances with traditional Komuz players, folk dances, and nomad games.

Similar to Nauryz kozhe in Kazakhstan, in Kyrgyzstan, people usually cook sumolok, a traditional Nauryz dish where the basic ingredients are water and wheat. It is similar to wheat pudding made of sprouted wheat, flour, and vegetable oil.

Like kokpar in Kazakhstan, Kyrgyz people play kok boru, a traditional game during which men riding on horses compete in an effort to take a goat carcass to the end of a playing field and win the opponent.

In Uzbekistan, people also celebrate Nauryz for several days engaging in activities like its neighbors.

Uzbekistan had not celebrated Nauryz up until its independence.

«After our country gained independence, along with other values, Nowruz was revived as a national holiday. Every year this day is widely celebrated in all regions of the country. In the parks and squares, folk festivals, concert programs, performances of folk-ethnographic groups, horse riders and strong people. In the mahallas, various events dedicated to Nowruz take place over several days,» writes Uzbekistan’s National Informational Agency.

No celebration goes without cooking the most delicious meals, including also sumalak, a sweet meal that is also common in Kyrgyzstan, nishalda, which refers to a sweet dessert consisting of egg whites whipped with sugar and fragrant roots.

«Sumalak is an ancient dish, there are different legends about its origins,» said Samarkand resident Etibor Mahmudova. «However, each of them calls for being kind and merciful to those around us and not to allow wastefulness. These legends are still important today. That is why in the days of Nowruz we, the representatives of the older generation, prepare sumalak every year. Young people also take an active part in the process of preparation, which helps them better understand the essence and significance of our ancient traditions and customs, teaches us to value and preserve our peaceful and happy lives.»

In its multiple meanings, Nauryz is therefore a holiday that brings hope for a better future, and this year is no exception when the world is reeling from the ongoing pandemic and escalating confrontations, hope for the future is everything that people need.