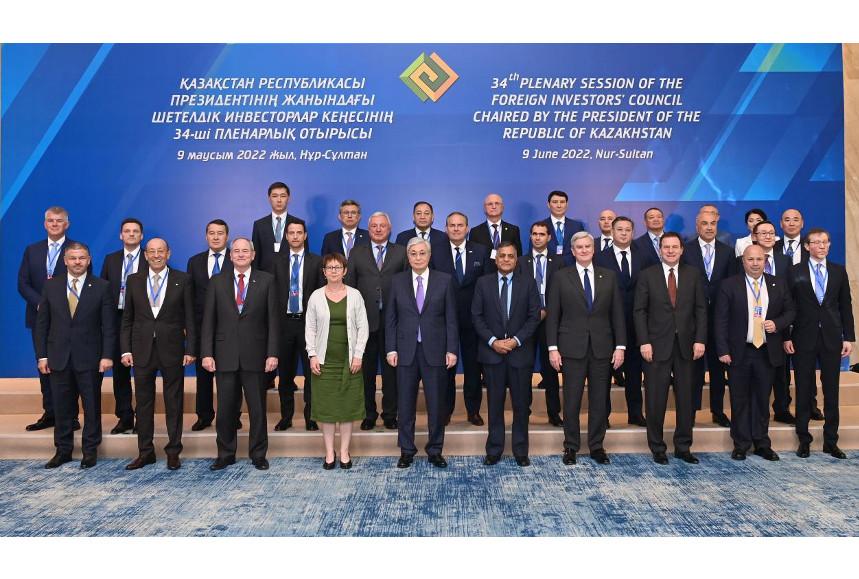 NUR-SULTAN. KAZINFORM - A meeting of the Foreign Investors Council was held in Nur-Sultan under the chairmanship of President of the Republic of Kazakhstan Kassym-Jomart Tokayev, which was attended by top managers and heads of major multinational companies, heads of government agencies, and representatives of international organizations, Kazinform cites the press service of the Kazakh Foreign Ministry.

The 34th plenary session of the Foreign Investors’ Council was devoted to the topics of decarbonization of the economy and the implementation of low-carbon technologies to meet environmental, social, and governance ESG standards. This topic is currently highly relevant – climate change is already observed throughout the world, and experts' forecasts remain disappointing.

As the President stated at the plenary session, further improvement of the investment climate and the system of protection of lawful rights of investors are strategic tasks of our state.

«Kazakhstan continues to be an investment magnet among Central Asian countries. Last year, foreign partners invested around $24 billion in our economy, which was 38% higher comparing to the previous year. Remarkably, the non-primary sector of the economy already accounts for over 60% of total foreign investment inflows. We greatly appreciate these investments and shall do everything to fulfill all our obligations to foreign partners. Kazakhstan will only strengthen the policy of open doors for investors. In the current geopolitical context, we are ready to create all institutional conditions for direct cooperation with foreign companies,» the Head of State assured.

The President added that systematic work on improving the investment climate will be accompanied by large-scale reforms. They are aimed at developing fair competition, rooting out corruption, effective public administration, improving the quality of human capital and reforming the judicial system.

The meeting reported on measures to achieve carbon neutrality in Kazakhstan until 2060, and the development of a draft strategy for the large-scale economic, technological and social transformation.

Special attention was paid to the discussion of renewable and alternative energy sources, which have enormous potential in Kazakhstan.

The Head of State urged the Council members to intensify actions for the implementation of «green» projects, mobilize ESG investments, and the achievement of the UN Sustainable Development Goals.

Co-chair of the Foreign Investors Council, President of the European Bank for Reconstruction and Development (EBRD) Odile Renaud-Basso recalled that in 2022 the year marks 30 years of cooperation between Kazakhstan and the EBRD. During these years, the bank invested $ 10.3 billion in nearly 300 projects in various sectors of the Kazakh economy.

She also noted Kazakhstan was the first nation in Central Asia, which pledged to achieve carbon neutrality by 2060.

The heads of major corporations and companies operating in Kazakhstan have expressed their intention to expand investment in the «green» sectors of the national economy and projects to reduce carbon emissions.

Given the need for diversification of Kazakhstan's economy, the Foreign Investors Council under the President of Kazakhstan has renewed its composition.

Thus, recently new representatives of such leading international corporations as Microsoft (IT), Air Liquide (production of technical gases), and Baker Hughes (energy and industry) were added.