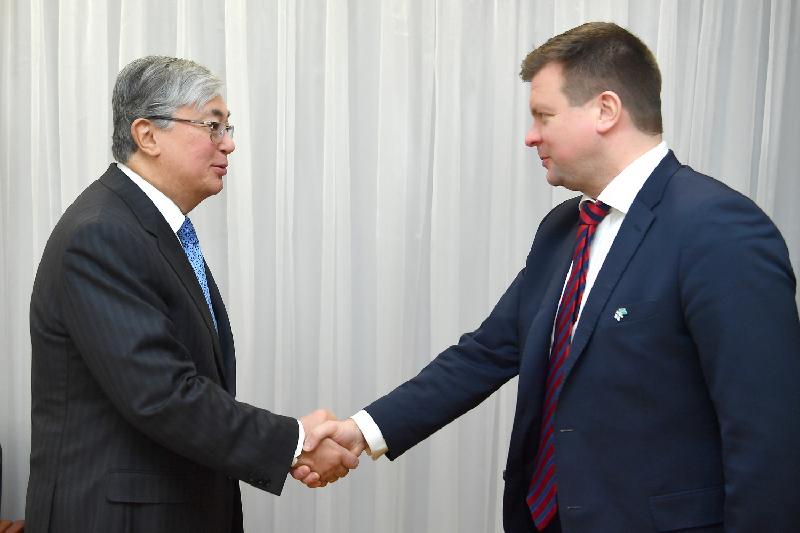 ASTANA. KAZINFORM Chairman of Kazakh Senate Kassym-Jomart Tokayev received the Parliamentary delegation of the Republic of Finland led by the chairman of the Finnish Parliament's Central Asia Group, Ville Skinnari, Kazinform refers to the press service of the Senate of the Parliament.

The meeting in Astana discussed further development of bilateral relations and inter-parliamentary cooperation between Kazakhstan and Finland.

In his speech, Mr. Tokayev highly praised Finland's economic and technological development and noted that Kazakhstan is interested in developing its partnership with Finland, especially in terms of green technologies and renewable energy.

Kassym-Jomart Tokayev also thanked the Finnish partners for their contribution to the 5th Congress of Leaders of World and Traditional Religions in 2015 and active role the country played in the International Specialized Exhibition EXPO-2017.

The sides exchanged views on the prospects for further cooperation in terms of projects implemented at the EXPO venues in Astana, including the International hub for the development of green technologies, investment projects under the auspices of the UN, AIFC, as well as the International Technopark of IT Startups.

The Senate Speaker noted the great prospects of partnership in terms transport and logistics, especially in the context of the interconnection of the Chinese Belt and Road initiative and Kazakhstan's Nurly Zhol program, noting Finland's role as the leading transport hub in the Baltic region and Northern Europe.

Speaker Tokayev also dwelled upon the cooperation in the educational sphere, calling for an extensive exchange of experience between the states.

The head of the upper chamber of Kazakh Parliament proceeded to inform his interlocutor of the recent State-of-the-Nation Address by President Nazarbayev in which the Head of State has set ten key tasks in terms of the country's modernization amidst the fourth industrial revolution.

In turn, Ville Skinnari noted the relevance of the President's Address as well as the commonality of challenges for both countries such as digitalization, economic reforms, the need for the development of green technologies, the fight against corruption and others, adding that the countries need to work together in this regard and affirming Finland's commitment to assist Kazakhstan in solving large-scale tasks the country is facing.

In conclusion, Kassym-Jomart Tokayev praised the dynamics of inter-parliamentary cooperation between the countries and suggested continuing the exchange of parliamentary delegations.