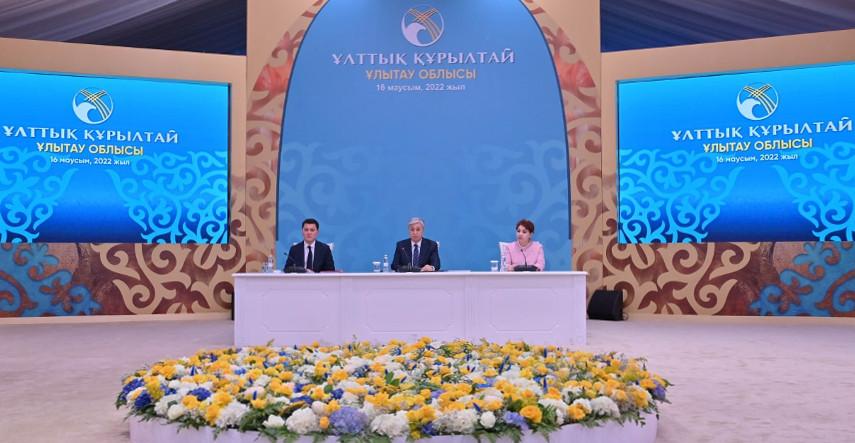 ULYTAU. KAZINFORM - Obviously, the creation of New Kazakhstan is not a matter of a day or a year, Kazakh President Kassym-Jomart Tokayev told the first meeting of the Ulttyq Qurultay, Kazinform correspondent reports.

«It is a complex and long process which aimed at changing the society. For it to come into reality, the actions of the Government are not enough. Only by working together as one, we will be able to achieve our goal. That's why I initiated to convene the Ulttyq Qurultay in my address,» said Tokayev.

The Kazakh Head of State underlined that the holding of the qurultay is an ancient tradition.

«At such representative meetings, our ancestors discussed important issues. People adopted necessary solutions having conferred with each other beforehand. Such solutions brought together the entire nation,» said the Head of State.

The Kazakh President went on to say that in the history of our nation there were the qurultay that were of fateful significance for the nation.

«Many of the qurultay were held at crucial times. The Talas Qurultay resulted in the Golden Horde becoming independent. Qurultay in Karakum and Ordamasy made our people unified in the protection of the motherland. At the first Kazakh qurultay in Orenburg, the Alash party was set up. The proclamation of the autonomy took place at the second qurultay,» said Tokayev.

During independence, the first World Qurultay of Kazakhs was held, the Head of State noted.

«To join the meeting, Kazakhs living abroad were invited to the motherland. Successors of great nomads roamed to independent Kazakhstan. All Kazakh qurultay played a huge role in the development of the country... Following the legacy of our ancestors, we have revived the tradition of holding the qurultay. Today's meeting is aimed at strengthening our country and unity,» concluded the Kazakh President.